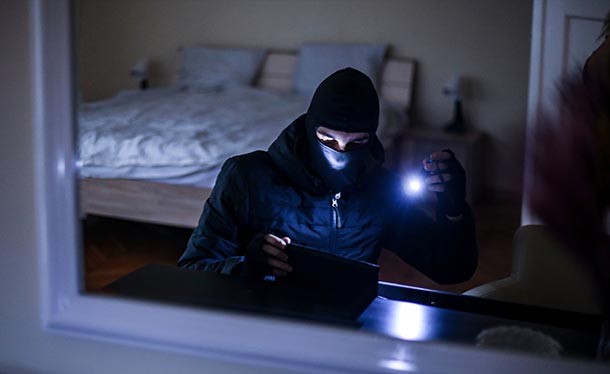 Burglary is usually viewed as a theft-related crime. While stealing is often an element for convictions, the State does not require you to have actually stolen something to prosecute you.

Burglary is defined by Minnesota law as the illegal entry into a building with the intent to commit a felony or misdemeanor— either directly or as an accomplice (assisting another in committing a crime). It is critical to work with an attorney to build a solid defense against a burglary charge, especially because burglary is frequently regarded as a serious crime.

Degrees of Burglary in MN

There are four degrees of burglary charges in Minnesota. The severity of the charge is determined by a number of variables.

First degree burglary is recognized as the most severe of the offenses. This happens when someone is accused of illegally entering a building while another person is inside and the defendant brings a weapon or assaults someone within the structure.

When someone enters a residence, bank, or pharmacy without permission and with intent to commit a crime, they are committing second-degree burglary. It could also apply to situations where a person utilizes a tool to get inside the property.

In a third-degree burglary case, a person is accused of entering a property without consent and with the intent to commit a gross misdemeanor.

When someone commits or attempts to commit a misdemeanor inside a building with a nonconsensual entry, it is called fourth-degree burglary, unless the offense is stealing.

The likelihood of a conviction is great when all of the major elements of burglary can be demonstrated. A guilty conviction is more likely if the defendant was caught with burglary tools on his person or was captured in the act by video surveillance.

Claiming innocence for the offense, alleging no personal knowledge of the incident, or claiming mere theft or trespassing, which carry lesser punishments, are all alternative choices for defending against burglary charges. Whatever course of action is chosen, a skilled criminal defense attorney with the correct approach may be able to have burglary charges dismissed by rebutting crucial factors.

This most basic of defenses requires the counsel to claim that the person charged did not commit the crime. The prosecution has the burden of proving criminal intent, purpose, and personal involvement in the offense through evidence. Charges may be dropped if there is inadequate evidence or if the evidence has been tampered with.

Charges may be withdrawn if there is solid proof and/or witness accounts proving mistaken identity or that the suspect was not present at the crime site.

Burglary charges are only applicable to certain types of residences and structures. If the property in question doesn’t meet the criteria for burglary under Minnesota law, lesser charges may apply. A consent defense can be utilized if it can be demonstrated that the property owner gave direct or implied permission to enter the property.

In certain situations, a crime may have been committed on the basis of impulse rather than intent. Because burglary proceedings frequently rely on the inference of purpose and intent, some defendants may assert that no burglary occurred.

Hiring a Criminal Defense Lawyer to Defend Against Burglary Charges

If you’ve been charged with burglary, you’ll need a powerful defense and hiring a skilled criminal defense lawyer is your greatest chance for a successful resolution.

Call Jeff Dean today at (612) 305-4360 if you or a loved one has been charged with burglary and would like to learn more about your legal options. Jeff Dean has repeatedly saved people from the consequences of burglary charges:

-In a recent case Jeff Dean’s client was charged with burglary after breaking into a Target store during the George Floyd protests. Jeff successfully persuaded the prosecuting attorney to allow his client to enter a diversion program. Jeff’s client walked away with no conviction on his record and no jail time.

-In another case Jeff got the charge dismissed outright by arguing that his client had implied permission to enter the residence.

“I was charged with burglary after my DNA was found at the scene of the crime. Jeff Dean persuasively argued that my DNA could have been at the crime scene in a number of innocent ways –  and the Judge dismissed the charge!”